''It is extremely rare for one ship to come to symbolize the navy of a nation. A warship whose name is so widely known, that the mere mention of the name triggers memories and history." 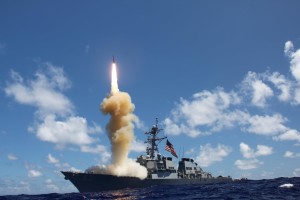 USS Enterprise is the only ship of the Enterprise class. They were planned to be 6, but built only one. She was the eight US warship to bear this historic name, but the first naval vessel with nuclear power in the world.

USS Enterprise was planned for 25-year service but she was well kept and maintained and was in service for 51 consecutive years. The famous aircraft carrier was engaged in many major navy operations and nearly a quarter million sailors served onboard.

The USS Enterprise has already retired but she still is the leader in the rankings for the biggest warship in the world and for the fastest one. The ''Big E" is the one that have served more than any other aircraft carrier in the United States Navy.

USS Enterprise is the most storied military vessel in the world.

''USS Enterprise is a grand ship that every shipbuilder can take pride in knowing that their skills and hands turned out an excellent ship designed to be the best from the first moment the keel was laid to the final day when she will be decommissioned. That alone shows that we build nothing but quality ships, and that USS Enterprise represents just that..." 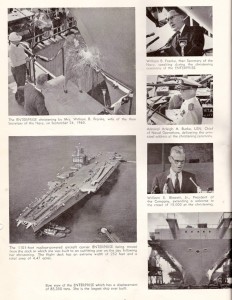 USS Enterprise was ordered on 15 November 1957 to Newport News Shipbuilding and Drydock Company by United States Navy. Her keel was laid down in 1958 at company's shipyard.

Still there is not much documentations or photography of the CVN65 construction. The most notable aircraft carrier and the innovative propulsion system were developed secretly .

The biggest warship in the world is 342 m long.

USS Enterprise was planned to be the begging of a six ships fleet but the costs for construction exceeded the estimations and no other ship was built.

Also, due to her cost, some design features, like RIM-2 Terrier missile launchers, were never installed. 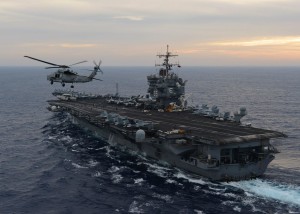 Her hull is described as a "cruiser-like".

The biggest warship was launched on 24 September 1960 and was sponsored by the then Secretary of Navy's wife, Mrs. W. B. Franke.

''The USS Enterprise was the first of its kind,and for 51 years its name has been synonymous with boldness, readiness and an adventurous spirit."

The maiden voyage of the biggest warship was on 12 January 1962. it was a test cruise with training exercises to check the capabilities of the USS Enterprise.

The first mission for the biggest warship in the history was to stop the Soviet deliveries during the Cuban Missile Crisis.

USS Enterprise took a major part in the Vietnam War. She had an accident who took 27 lives.

After the war, in the period January 1979 – March 1982, the biggest warship was revised, maintained and upgraded.

She took part in mission like Operation Praying Mantis, Operation Classic Resolve in the Philippines and Operation Desert Fox in the Gulf. 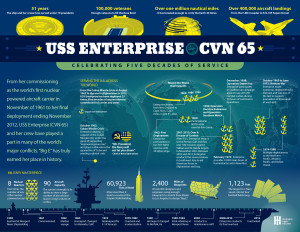 USS Enterprise was involved in the Afghanistan invasion, then the Iraq invasion, the Iraqi Freedom Operation.

Her long career includes also Hollywood roles. The biggest warship can be seen in movies like Top Gun and Red October.

USS Enterprise was planned to serve 25 years, she served 51.

On December 1st 2012 at the Norfolk Naval Station she was inactivated with a special ceremony. The decommission process of the biggest warship costs are estimated to $857.3 million and the process should be completed in 2015. Still it is not clear if she will be scrapped or she will remain a museum.

USS Enterprise will remain a legend and the name will continue with the next aircraft carrier CVN-80.