The E-Class series container ships by Maersk Line comprises 8 ships. Each one bears an ''E'' letter name. They were titled ''the largest container ship ever constructed'' until 2012 and currently are among the longest ships in service.

Emma Maersk is the first vessel from the A.P. Moller-Maersk Group E-class containers. At the time of her launching she was the biggest container ship that was ever built. After 2007 she was the longest ship in service. At that time, the biggest ship in the world, Seawise Giant, was a floating storage and offloading vessel, permanently moored in the Persian Gulf’s Al Shaheen Oil Field. 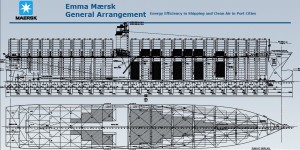 Emma Maersk, the biggest ship in service for 2007, was built in Denmark at the Odense Steel Shipyard for Moller-Maersk as an E-class container ship. The construction cost has been estimated to be over US $145 million dollars.

During the construction works, in June 2006, a fire occurred in her superstructure due to welding works. It damaged the bridge and the accommodation section and caused delay in the work by seven weeks. 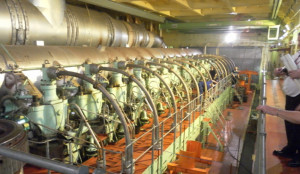 The 109,000 horsepower (80 MW) are powered by the world's largest single diesel engines - Wartsila 14RT-Flex96c. Its weight is 2,300 tons, burns 3,600 US gallons of heavy oil for only one hour and a major breakthrough in the ship propulsion. It is placed near the middle of Emma Maersk. That maximizes capacity and improves the use of the rigidity of the hull.

Emma Maersk has been build ''environmental friendly''. One of the largest ships ever has a special system of recovering the waste. The exhaust gas is used to supply extra power to the Peter Brotherhood Ltd. steam turbine and the electrical generators.

It is calculated that this creates almost 12% of the power of the engine, because it provides nearly 8.5 MW. It also lowers the carbon dioxide emissions. 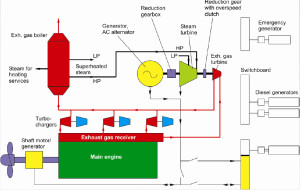 This system is even improved in the world biggest ship currently in service, Maersk Mc Kinney Moller.

The port of Emma Maersk is very manoeuvrable. She has two bow and two stern thrusters and two pairs of stabilizer fins which help in rolling reducing.

The hull is covered by a special type of paint – silicone based. This type of paint replaced the commonly used in the industry – biocides, and still keeps barnacles off. The silicone based paint protects the sea from biocides leakage and lower the water drag. It is estimated that the largest ship for 2007 saves 1,200 tonnes of fuel annually due to the new technology. 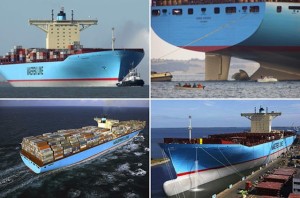 At the time of her launching she became the largest container ship ever built. The name of the first E-Class container was given on the 12th August 2006 on a special ceremony, after she had been recovered in a record time from the fire during her construction. The name came from Emma Marie Neergaard Rasmussen, later Emma Maersk, the late wife of Maersk Mc-Kinney Moller.

The biggest sailing ship at that time started her maiden voyage from Aarhus on 8 September 2006. The ports that Emma Maersk called were Gothenburg, Bremerhaven, Rotterdam, Algeciras and the Suez Canal. She arrived on the first of October 2006 in Singapoure and started round-up trip. It ended at Aarhus on November 11th 2006. 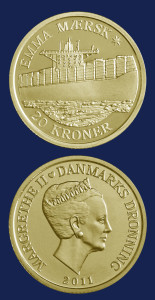 Emma Maersk most famous voyage was for Christmas 2006. The biggest ship at that time was called SS Santa because she had to transport Christmas good from China to the UK. After that she returned to China UK waste which was recycled.

In 2007 the biggest ship in service received the award '' Ship of the Year'' given by the world longest running periodical- Lloyd’s List. Emma Maersk was awarded for setting new innovation standards, for safety and for being environmental friendly.

In 2011, the National Bank of Denmark issued a commemorative 20 DKK coin for one of the largest ship in the world.

Emma Maersk biggest accident was on the first of February 2013. 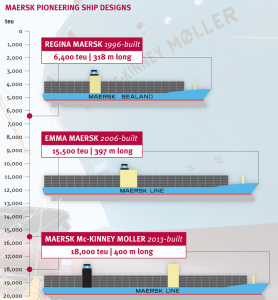 The E-Class container ship had just started transiting the Suez Canal sailing to Asia when she suffered a damage stern thruster and the propeller blades cracked the ship’s hull. The engine room of once's biggest ship in the world flooded and the vessel lost power. Emma Maersk's captain terminated the voyage and the ship went alongside the nearby Suez Canal Container Terminal, Port Said. Her cargo was discharged and she was investigated by divers.

She left Port Said on February 15th 2013 and reached Fincantieri yard in Palermo, Italy on February 25th 2013 for repair. The repair costs were estimated to be $44.5 million dollars.

Annually Emma Maersk sails 170,000 nautical miles or that equals to 7½ times around the world.