Pierre Guillaumat, the second in the biggest ship ranking, is the largest ship by gross tonnage that have ever been built. 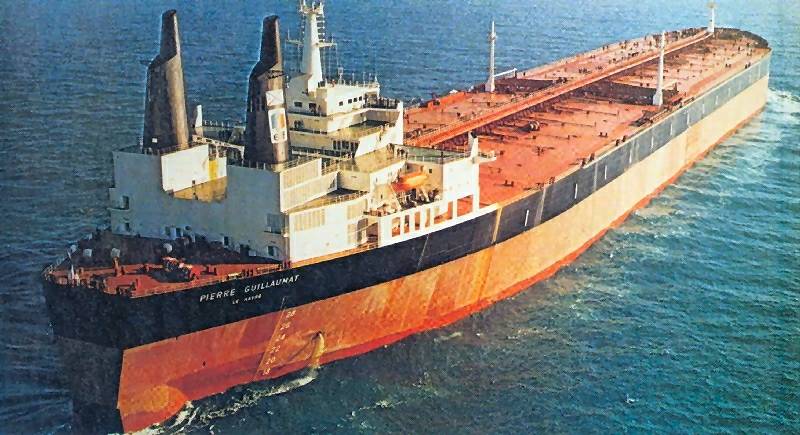 Seawise Giant is considered to be the biggest ship in the world but in the ranking of the largest ship by gross tonnage she is behind the four French-flag, Batillus class ULCC's (ultra large crude carriers). They were delivered by Chantiers de l'Atlantique at St Nazaire in the period 1976-1979. 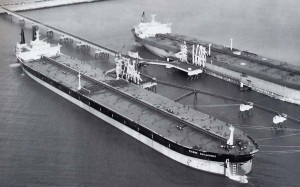 The first two were ordered by Societe Maritime Shel. Both were 75,267gt, 553,662dwt supertankers.

The other two were ordered by the Compagnie Nationale de Navigation. Both were 274,838 gt, Pierre Guillaumat was of 555,051 dwt, Prairial was a 554,971dwt supertanker.

Their big size placed some restriction to where they could be used. Probably this is the main reason for their early demise.

Pierre Guillaumat, the third ship of Batillus class supertankers, was the biggest among her sister-ships. She was built for Compagnie Nationale de Navigation by Chantiers de l'Atlantique at Saint-Nazaire. Her building started in 1976 and she was launched on 16th of August 1977.

The engine was with 65,000 Hp total power made by two propellers. Each of them was powered by 2 Stal Laval steam turbines. Her fuel was enough usually for 42 days due to her daily heavy oil consumption – approximately 330 tonnes. The maximum speed of Pierre Guillaumat, the biggest ship in the world by gross tonnage, was 16.7 knots.

The total volume of the supertanker was 677,300 m3 . She had 40 tanks specially designed to lower significantly the risk of pollution in cases of eventual grounding or collision – they were separated to central and lateral and had special dimensions.

Pierre Guillaumat was build way ahead of time international standards. The maximum unit volume of her wing tanks was less than 17,000 m3, at the most liable parts of the vessel was even lowered to 9,000 m3 .

The Story of the Largest Ship by Gross Tonnage

The biggest ship in the world by gross tonnage was launched 16th of August 1977. She was named after Pierre Guillaumat, French politician and founder of Elf Aquitaine oil industry. 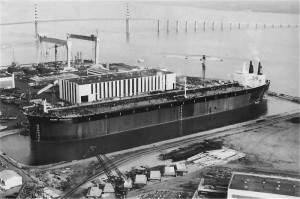 Unfortunately, the sizes which made the vessel so famous, were the reason she was restricted in her possibilities for employment. The large proportions of Pierre Guillaumat limited her usability. The biggest ship in the world by gross tonnage was not able to move by means of the Suez or Panama canals. Her gigantic dimensions, especially her draft, allowed her to anchor a minor number of ports in the world. Usually Pierre Guillaumat was anchored on offshore platforms or oil terminals, for example Antifer, and at Europoort right after unloading to lower her draft. 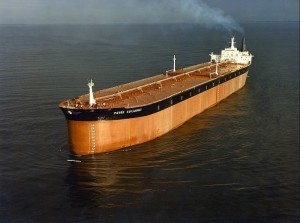 Consequence of the unprofiability of those enormous sizes was the fact that she finished her service too early. Pierre Guillaumat was the first one from the four French-flag, Batillus class ULCC which was placed on hold. The biggest ship in the world by gross tonnage was anchored at Fujairah port on February 2, 1983 and stayed there for an year.

In 1983 she was bought by the Hyundai SB & Engineering Co. Pierre Guillaumat was renamed Ulsan Master for her last voyage to Ulsan, South Korea. There, on October 19 1983, she was demolished.