The bulk carriers are merchant ships designed for transportation of unpackaged bulk cargo like ore, coal or grains. They make nearly 15% - 17% of the merchant vessels in the world and vary in sizes.

The largest of them are the VLOC (Very Large Ore Carriers). The VLOC deadweight is more than 300,000 tonnes and they are specialized in iron transportation.

Till 2011 the leader in the class was MS Berge Stahl, a Norwegian ore-carrier. She lost the battle for largest ship in the world type ''bulk carrier'' to the MS Vale Brasil. She was the first vessel from the Valemax fleet owned by Vale S.A., Brazilian mining company with purpose delivering iron ore from Brazil to ports in Asia and Europe. 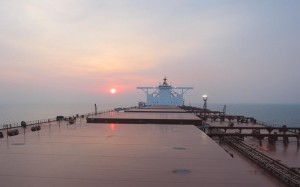 The previous year, 2008, Vale Shipping Holding Pte. Ltd had placed their first order for the largest bulk carriers in the world to Jiangsu Rongsheng Heavy Industries (RSHI) in China.

Regardless that fact, the first Valemax vessel came from DSME. They launched MS Vale Brasil on December 31st 2010. She became the biggest ship in the world in class ''bulk carrier'' and was delivered to her owner in Vale tree months later – in March.

The gross volume of MS Vale Brasil is 219,980 m3 and it is separated in seven cargo holds. Each of them has a volume of almost a small Panamax carrier and is loaded by a ship-loader with 13,500 tph loading rate. The biggest ship ''bulk carrier'' type has 402,347 tons deadweight tonnage and 67,993 net tonnage.

Her draught goes to 23 m when she is fully loaded with iron ore, this equals to over 11,150 trucks and limits her to call only several ports in Brazil, China and Europe. 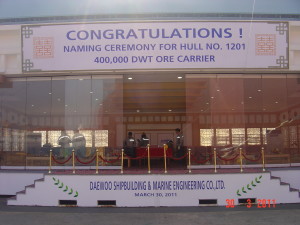 MS Vale Brasil was completed on 30 March 2011. Her first course started on the 24th May 2011. The biggest bulk carrier was loaded with 391,000 tons of iron ore from the Terminal Marítimo de Ponta da Madeira, Brazilian port. The destination was in China, Dalian but after MS Vale Brasil turned round Cape of Good Hope in June, she was sent back to the Atlantic Ocean with new destination - Taranto, Italy where she arrived on July 14th 2011. The rerouting of MS Vale Brasil evoked some speculations regarding the reason. Vale stated that the reasons were commercial and had nothing to do with the speculations that China forbids MS Vale Brasil to enter fully laden its port.

The Valemax fleet had unloaded fully laden ship at Sohar in Oman, Dalian in China, ?ita in Japan, Rotterdam and the transshipment hub Vale at the Subic Bay, Philippines since then. 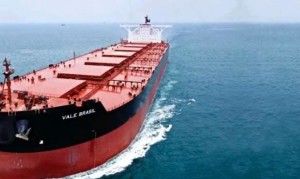 The Ministry of Commerce of the People's Republic of China tried to protect their shipping industry and they banned bulk carriers to enter Chinese ports if their capacity is over 300,000 tons. This was done officially on 31 January 2012 and the Valemax fleet is not able to enter the ports of China.

While the discussions on the ban are ongoing, the biggest ship in the category bulk carrier, MS Vale Brasil, operates using transit centers in Africa and some distribution ports in the Philippines and Malaysia to reach the Chinese customers.