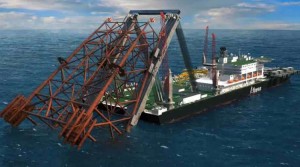 One of the world's largest vessel, Pieter Schelte, is currently under construction in Korea at Daewoo shipyard. It is a platform installation/decommissioning and pipelay ship, project of Allseas company, which will be completed in the Netherlands (Alexiahaven, Rotterdam port).

The largest pipelay vessel is named after Pieter Schelte Heerema, a marine engineer and a father of Edward Heerema – owner of Alleas. Upon its completion, it will outrun the current biggest pipelay ship – Solitaire (operational since 1998).

"We are really proud of the fact that a company leader in pipeline constrcting such is Allseas, is responsible for such a great project, as Pieter Schelte is. The construction of this vessel will be a grandiose boost for the maritime industry, and we, on behalf of Rottherdam port, will be pleased to make it possible. This corresponds to our efforts to develop the Rotterdam port as one of the largest centers in the marine industry," Allard Castelein, Rotterdam Port Authority CEO. 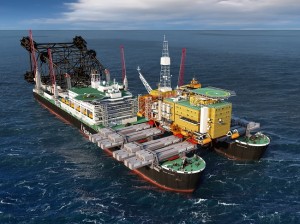 Designers of the vessel are the Deltamarin's engineers. The preparation for the building of the Pieter Schelte started in 2007 with the order for the power generation equipment and the thrusters. A year later, in June 2008, the order for the topsides lift systems and the high-tensile steel for the jacket was placed. Apex Hydraulics installed the hydraulic cylinders on the A&R Winch (480 bar test pressure reacting). Swan Hunter completed the design of the hull in England (Newcastle upon Tyne). Pieter Schelte's lifting system basic design was ready in the end of 2008.

The contract for Pieter Schelte building was awarded to Daewoo (South Korea) by Allseas in June 2010. Three years later (2013) the hull of the vessel was launched. The largest pipelay vessel will be completed in Alexiahaven, Netherlands (Maasvlakte 2).

The cost of the vessel is expected to be US$1.7 billion. In 2013 Allseas announced plans to build a second vessel, due to arrive in 2020, which will be larger that Pieter Schelte.