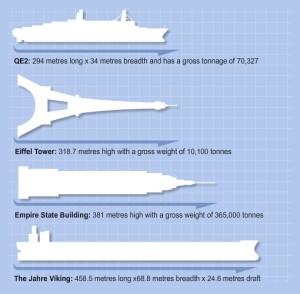 A merchant vessel designed for the transportation of oil is called an oil tanker. The biggest ship in the world, Seawise Giant, belongs to that category. They are divided in two major types – product tanker and crude tanker.

They also can be classified by their sizes. The biggest oil tanker ever is ULCC or ultra large crude carrier.

Annually, 2,000,000,000 metric tons oil are transported by tankers. This is the second efficient method of transport after the pipelines. The transportation with one of the biggest oil tankers adds only between 2 and 4 cents to the price of gallon (3.8 liters).

The biggest oil tankers in service currently are the TI Class. TI Europe and her sister ships TI Africa,TI Oceania and TI Asia were the first ULCC built for the last 24 years.

The ranking is based on overall length. 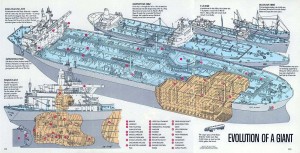 The oil tanker industry started in the 1860s and the first biggest oil tanker was driven by wind sails. The Palmers Shipbuilding and Iron Company were the pioneers in steam engine tankers. The first was the Vaderland, built in 1873.

The 1870s biggest oil tanker was designed by the Swedish Ludvig and Robert Noble. The tanker was constructed in 1878 and her name was Zoroaster. The biggest oil tanker of that time carried the oil into two iron tanks and had capacity of 242 long tons. She was 184 feet long, her beam was 27 ft and 9 ft draft.

The next big step in the industry was in 1883. The biggest oil tankers were designed with several oil holds. The idea was given by Colonel Henry F. Swan, a British engineer. The first tankers with this systems were the Lumen, Lux and Blesk. The first "modern" oil tanker also was Colonel Henry F. Swan design. The Glückauf was built in 1986 and was the pioneer of the technology of pumping the oil directly into the ship's hull. There was no longer barrels or drums loading.

The first biggest ship in the begging of the 20th century was the Vandal. Built in 1903 she was the first diesel-electric vessel, designed by the Nobel brothers. The Vandal had a capacity of 750 long tons. 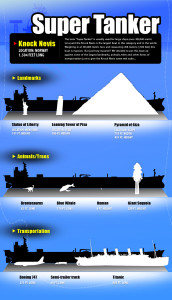 The World War I was the reason for the developing larger ships. The ships had to be bigger to carry more oil for the warships. The USS Maumee, built in 1915, was the first ''underway replenishment' technique'' ship.

The end of the World War II did not stop the growth of the oil tankers sizes. The biggest oil tanker in that time was the Bulkpetrol. She was build in the end of the 1940s and had capacity of 30,000 long tons.

In 1955 the Bulkpetrol was overpass by Sinclair Petrolore. The biggest oil tanker of that time had a capacity of 56,000 long tons.

The AFRA or average freight rate assessment was developed by Shell Oil and the London Tanker Brokers’ Panel in 1954. The oil tankers were divided to General Purpose, Medium Range and Large range. But after the construction of the biggest oil tankers in the 1970s the system for categorizing the sizes was updated. Currently the tankers are categorized according to flexible market scale.

The scale is base on deadweight metric tons. The biggest oil tankers are the ''supertankers'' or VLCC and ULCC. Their capacity exceeds 250,000 DWT.

The smaller oil tankers to 80,000 DWT are used to transport petroleum products (the product tankers and Panamax class). The smallest work only near the coasts. The Aframax and Suezmax were classified supertankers in the past. Today they are way smaller then the biggest oil tanker.