The large container ships built for CMA CGM  are the Explorer class. Those were the biggest ships by gross tonnage until the delivery of Maersk Mc -Kinney Moller.

The Explorer container ships are named after famous explorers and currently are nine. The class started with five 365 m long vessels with 13,300 TEU nominal capacity and developed to 396 m and 16,020 TEU starting  with CMA CGM Marco Polo, the biggest ship by gross tonnage in service till 2013. 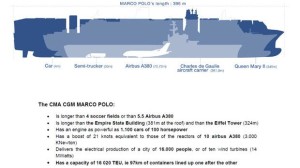 CMA CGM Marco Polo was built by Daewoo  Shipbuilding  and Marine Engineering  (DSME) in South Korea. She was the first of the second type Explorer container ships. The biggest ship in the world by gross tonnage at that time was such an engineering masterpiece. CMA CGM Marco Polo was build 396 m long, 54 m wide with a draft 16 m with capacity of 16,020 TEU, for reference Emma Maersk was ''only'' 15,200 TEU. Due to her huge dimensions, the biggest ship from the Explorer's was build in parts, each around 2,000 tonnes. The parts were lifted by cranes, then in the dry dock they were assembled and welded.

CMA CGM Marco Polo can sail at 25.1 knots and can accommodate 27 crew members.

The propulsion of the biggest ship by gross tonnage till 2013 is given by Wartsila 14RT-Flex96C low speed diesel engine. It is eleven-cylinder version of the one in Emma Maersk, 14-cylinder Wartsila 14RT-Flex96C. Its length is 13.5m, the width is 27.3m and it weights 2,300 tonnes. The maximum power output of the CMA CGM Marco Polo engine is  80,080 kW at with 102 rounds per minute. The engine is electronically controlled, operates smokeless and the nitrogen oxide in the exhaust gases is reduced. The fuel and lubricant oil consumptions is lower than average, 3%  for the fuel  and 25%  for lubricant, due to the '' exhaust gas by-pass'' system. 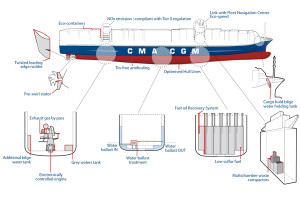 Beside the engine, CMA CGM Marco Polo is equipped with various features to make her environment friendly.

The biggest ship by gross tonnage till 2013 has ballast water treatment system which does not allow transfer of micro-organisms and bacterias from ocean to ocean. The water, carried in the ballast tanks, goes trough fillers and UV lamps which kills all living organisms. It also stops harmful chemical to affect the oceans and seas waters.The pipe plan is modified to ease the low sulphur MDO diesel use in the ports of Europe.

The maritime regulation, set by the International Maritime Organization, requires the Energy Efficiency Design Index (EEDI) to be reduced by 2025 with 30%. CMA CGM MARCO POLO has already met that criteria with its 31%. 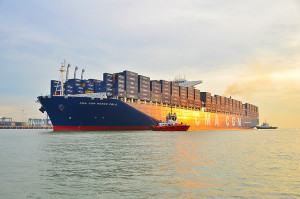 CMA CGM Marco Polo was ready on November 5th, 2011. On November 6th, the biggest ship at that time was in service and the next day, November 7th , she started her maiden voyage from Hamburg, Germany. The voyage was 77 days and on January 24, 2012 CMA CGM Marco Polo arrived in Ningbo, China. The purpose of the journey was transportation of Christmas goods.

Captain of the biggest ship at that time was the Croatian Captain Velibor Krpan.

CMA CGM Marco Polo service was mainly cargo goods. She travels every 11 weeks between Europe and Asia with route: 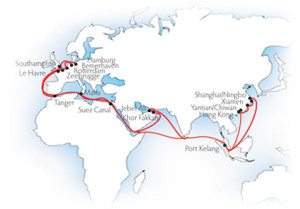 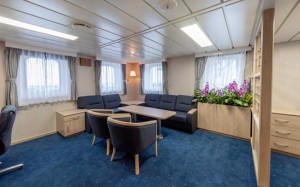 CMA CGM Marco Polo has 5 double modern cabins, a fitness room, a swimming pool, a library and a lounge with TV set. All that, with the possibility to share the everyday life of the crew, offers a memorable and unique experience for travelers. They can enjoy unforgettable cruises on the world main linking routes between Europe and Asia and to visit the biggest ports in the world during the voyage of one of the largest ships ever.

CMA CGM Marco Polo stayed on the of the top of biggest ship by gross tonnage ranking until the launching of the current leader Maersk Mc - Kinney Moller on the February 24th , 2013.