''There are long waiting lists for megayachts in the big European shipyards. The demand is strong because the extremely rich are getting richer in recession.''

The only sector that is not influenced by the recession is the magayacht's one. Over the past few years, it even has intensified in race of building ever-bigger superyachts.

In the current yacht top 100 leaders are the Middle East owners, 31, then Russians -19, and 17 are American owned.

The biggest yacht in the world is the private megayacht Azzam. In 2013 she knocked the three-year reign of the billionaire Roman Abramovich Eclipse.

Previously the owner of the biggest yacht in the world was unknown. It was revealed in Yachts France annual megayacht league table. Azzam belongs to the President of the United Arab Emirates and Emir of Abu Dhab, Sheikh Khalifa bin Zayed al-Nayan.

Still in secret is the cost of the megayacht. Yachts France estimates building price between $400 million and $600 million.

''Ever since the first sketches, we could sense that we were on the right track. The design had strength of character and sense of purpose, yet also had timeless elegance, even while incorporating elements of visionary contemporary modern design.'' 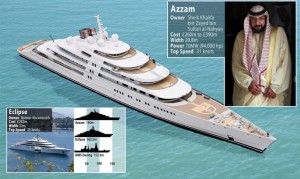 The biggest yacht in the world was built by Lürssen, German luxury boat builder.

The leading engineer of the project was Mubarak Saad al Ahbabi, designers were Christophe Leoni and Nauta Yachts.

The project of the biggest yacht took a year in engineering and three years in building. Superyacht Times defines this as a record building time. 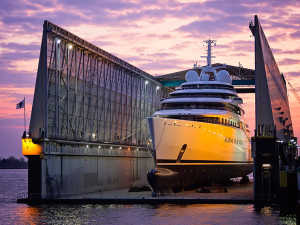 The biggest yacht in the world power comprises two diesel engines and two gas turbines. Azzam's 94,000 horsepower is throught four pump-jets. Two of them are in the middle of the stern and are non-movable round water outlets. The other are positioned on either side of the non-movable ones and are with thrust vectoring capabilities using moveable duct water outlets. Azzam will be able to reach 32 knots top speed, exceptional for a yacht of her size. She has already proven this in her first sea trials. This makes Azzam not only the biggest yacht but also the fastest one.

The main saloon of the megayacht is 29 m, the beam 18 m with no pillars and an open plan. She has approximately 50 suits onboard.

The decks are six and the spaces are mostly covered which makes her non-typical yacht and the sun-worshipping  will not be her only purpose.

The biggest yacht was delivered to his owner on 9 September 2013 and what Azzam will be used for is still to come.