''When you get bigger ships, you can more efficiently carry more cargo, so the carbon footprint you get per tonne of cargo is smaller." Unni Einemo, Sustainable Shipping 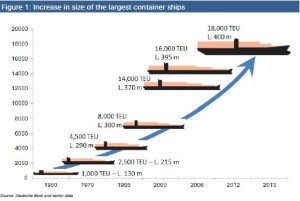 Container ships are the transport concept that have changed the world. They are one of the key elements in the world globalization. Their introduction made economic sense to the international goods trade.

The largest container ships offer massive cost reduction in goods transportation. The efficiency of that transport concept reveals in competition of building larger and larger vessels.

The biggest cruise ship in the world, since 2013, is the Triple  E class vessel Maersk McKinney Moler owned by Maersk, Denmark.

The biggest container ship ranking is based on their TEU capacity, except Maersk. They usually do not quote TEU capacity but maximum load capacity with all TEU filled with an average value of 14 tonne. The real TEU may be much higher due to its commercial sensitivity. 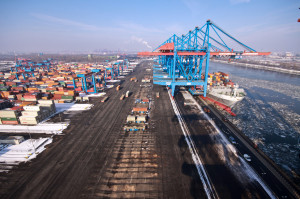 The idea of transporting goods in containers is not a new one. The first were the ancient Greeks. They used to transport wine or oil in sealed vests, amphorae or vases. Large trunks were used by later cultures for shipping different types of goods. The containerization, as a modern industry, dates since the 1950s.

''Father of the contirezation" is Malcom McLean. He was an owner of trucking business in America, North Carolina.

The laborious methods were not his idea of handling goods. He was the one that saw that overcoming the highways congestion, the inefficient procedures for loading and unloading cargo vessels would benefit that kind of transportation. His idea was the first biggest container ship in the world - the Ideal-X, refitted tanker. Her maiden voyage was on April 26, 1956. The first biggest container ship carried 58 truck bodies from from Newark, New Jersey to Houston, Texas and this is considered to be the start of the container ship industry. 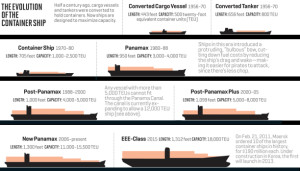 The 1960s decade was the start of the shipping companies' competition for building the biggest container ship. Companies including P&O , Maersk Line and Hapag Lloyd introduced their first vessels constructed for carrying containers.

After his death in 2001, Malcolm Mclean was named "Man of the Century" (awarded by the International Maritime Hall of Fame and by Lloyd’s List).

Despite the fact that the container industry changed the world, it caused many issue. There were huge concerns of handling the biggest container ship. Most of the world ports were not prepared to accommodate the enormous sized ships.

The advantage of the biggest container ship is that it reduces dramatically the costs, the cargo comes save in sealed by the factory containers. There are exact tracking systems, so the arrival of the goods is known with accuracy. The operations are quite optimized.

The biggest container ship in time belonged to different categories depending on her TEU. They are divided into seven categories. 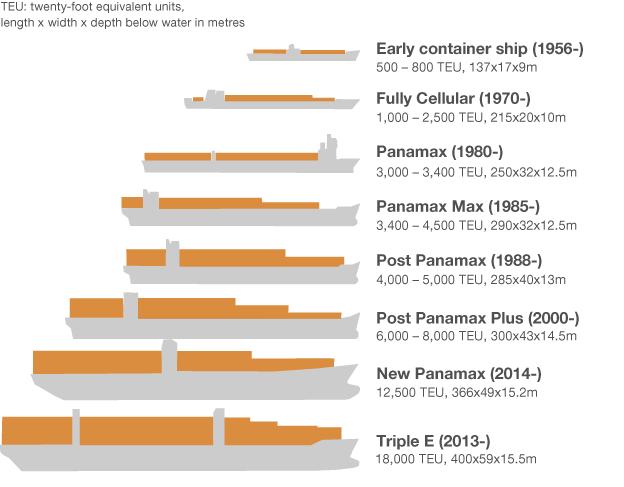 The Panamax type vessel has sizes limited by the Panama Channel. A "New Panamax" container ship will transit the new built three locks. The smallest container ships are the feeders. Their main service is collecting cargo from small ports and discharging it at a bigger one. Then the cargo is transshipped on a larger ship.

The biggest container ship in the world is ULCV (Ultra Large Container Vessel).