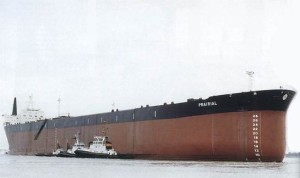 In the mid 70s the ship industry offered the world the biggest ships ever. This was the beginning of the supertankers. The biggest ship in the world, Seawise Giant, was ordered in 1974. She was considered the longest ship in the history. The tonnage leaders are the supertankers from the Batillus Class, one of the first Ultra Large Crude Carriers. They did not have any fix piping and were able to transport huge quantities of oil each year.

Prairial was the fourth and last vessel in this family. In the ranking of the biggest ship in the world, she is placed at number 5.

Prairial is the only ship in this class that was in service more than ten years.

Prairial was the last ship from the Batillus Class Tankers. Her ship sister had already been built – Batillus and Bellamya in 1976 and Pierre Guillaumat, the biggest ship in the world by gross tonnage, in 1977. 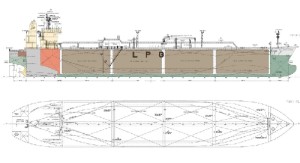 Prairial was ordered by the Compagnie Nationale de Navigation, like Pierre Guillaumat, and delivered by Chantiers de l'Atlantique at St Nazaire in 1979.

The deadweight tonnage capacity of the 5th biggest ship in the world was massive - almost 555,000 tonnes. That helped her in winning battles against storms several times. 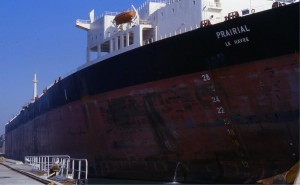 Like all her sister ships, her big sizes placed some restriction to Prairial use, but unlike them she served the world for nearly 34 years cargo good and crude oil.

Some sources distinguish Prairial to be the third biggest ship ever constructed after Seawise Giant and Pierre Guillaumat.

All the Batillus class tankers were built away ahead of their time.

Prairial 40 tanks were specially designed to lower significantly the risk of pollution in cases of eventual grounding or collision, with special dimensions and separated to central and lateral. The total volume of the third biggest ship ever constructed was 677,300 m3 .

The maximum unit volume of her wing tanks was lower than 17,000 m3, at the most vulnerable parts of the vessel was even nearly 9,000 m3.

There was no difference in the engine too. Like the one of the biggest ship in the world by gross tonnage, Pierre Guillaumat, the total power was 65,000 Hp made by two propellers. The power of each propeller was driven by 2 Stal Laval steam turbines. Her consumption was approximately 330 tonnes heavy oil, and the fuel was enough for 42 days. The approximate speed of these class supertankers was 16.7 knots.

The Story of the last Batillus Supertanker

Prairial is one of the biggest ships that was in service over 10 years. During this time, she had a few names Sea Brilliance (given in 1985), Hellas Fos (given in 1986) and Sea Giant (given in1997), but the 5th biggest ship ever is mostly know by Prairial.

The last Batillus supertanker was launched on September 21, 1979 and put in service in December 1979.

Like her sisters, one of the biggest ship ever,on April 5, 1983 she was anchored at Vestnes, Norway. Unlike them, after she had been sold she was renamed and put in service.

During her life, Prairial changed several names and owners.

One of the biggest ships ever was scrapped in Gadani ship-breaking yard, about 50 km northwest of Karachi in Pakistan, in September 2003.