''This is revolutionary technology developed by Shell. It has the potential to change the way we produce natural gas.'' 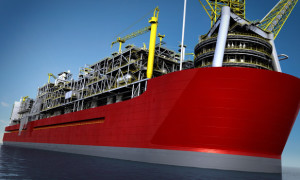 This project will ease and cheapen the gas output, especially from larger fields.

Currently there is no such facility but the first project has already been announced.

This revolutionary technology will be the biggest ship ever – Prelude FLNG Project by Royal Dutch Shell.

''This has never been done before. We had to find ways to adapt our technology for off shore.''

Royal Dutch Shell has started working on their own FLNG technology since the mid 90s. The base of the project has been taken from concept related projects like the ones in Nigeria, Namibia and Timor Leste in Australia. 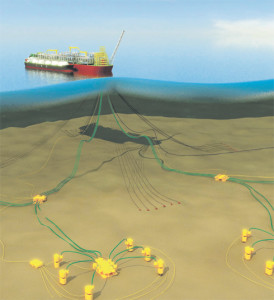 The project combines the experience of hundreds of engineers. The idea is to help open up new fields of natural gas at sea.

Royal Dutch Shell, Samsung and Technip signed an agreement in July 2009 for the design, the construction and the installation of the biggest ship /facility/ ever.

The Prelude FLNG Project was announced on 20 May, 2011. The facility will be used 200 km off the coast of Australia, in the Browse Basin, and it will produce and transfer LNG.

It took more than 1.6 million man hours for the engineers to design and develop the biggest ship ever.

The first and most important was to assure that the Prelude FLNG will stay safely moored and operate even in severe weather, its sheer sizes will make this facility the largest vessel in the world. 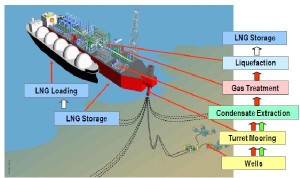 The new biggest ship in the world will be moored with 93 m high turret structure. It is currently constructed in Dubai. Due its huge dimensions, the transportation to the Samsung shipyard in South Korea will be done in 5 parts. This system run vertically through the Prelude FLNG. The mooring lines that will anchor the seabed will be divided into 4 groups. This gives more safety in case of heavy cyclones, the facility will turn slowly anchored over the field of gas.

Prelude FLNG will be the biggest ship in the world due to her planned size. She will be 488 m long, currently the biggest ship, Maersk Mc-Kinney Moller, is ''only'' 400 m. This facility will weight 600,000 tonnes. 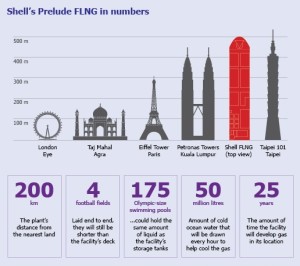 Prelude FLNG will be the largest vessel in the world, but still she has been designed to save space. Most of the components will be stacked vertically.

The thrusters will be in the rear of the Prelude FLNG. They will be 3 with 6,700-horsepower and 2 will operate at any one time.

The main service of the mega project will be chilling the natural gas to –162°C (-260°F). Then the gas volume will be shrank 600 times to ease the transport to the customers.

''Innovative thinking and leading edge technology, as well as hard work from those at Shell and our partners, have helped us reach this significant point in construction. Prelude’s size and scale is unprecedented and I look forward to seeing this enormous structure take shape. Shell is pioneering FLNG which has the potential to revolutionize the way natural gas resources are developed.'' 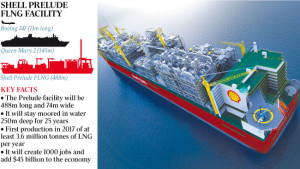 The first steel cut of this respectful facility has been done in September 2011 at the ship yards of Samsung Heavy Industries’ Geoje Island, South Korea. This yard is one of the few that is able to construct the biggest ship in the world.

The building of the turret started in May 2012 in Dubai. In October 2012 the first steel of the Prelude FLNG substructure was cut in Australia and January 2013 was the start of the topsides.

The ready Prelude FLNG will be towed to her undersea structure in Western Australia, 475 km north-northeast of Broome. The new biggest ship already received environmental approval on November 12, 2010 by the Australian Government. 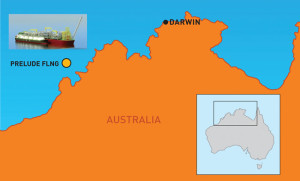 Currently, Shell Australia is recruiting employees for its Prelude FLNG. The estimation is that there will approximately 350 direct and 650 indirect works. The first campaign was in March 2013 - major technical recruitment. The new biggest ship in the world will bring revenue and taxes to Australia. Shell will continue spending billions – either in capitals or operating costs. Also, Prelude FLNG will create new business opportunities.

The new biggest ship in the world will stay for 20-25 years and the place is chosen to meet the LNG demand of Asia which is constantly increasing.

The project Prelude FLNG is expected to be the first facility in the multiple Shell FLNG projects.