The mid 70s were the begging of the largest ships ever built. The biggest ship in the world, Seawise Giant, was followed by the Batillus Class Tankers. Those supertankes were transporting huge quantities of oil each year without any pipe fixing.

The second vessel in the Batillus family was Bellamya. Up to day, she holds the 4th position in the ranking of the biggest ship in the world.

The fourth biggest ship in the world was constructed by Chantiers de I’Atlantique at Saint-Nazaire and built for the French branch of Shell Oil in 1976. She was second of the Batillus Class Tankers, right after her sister Batillus. 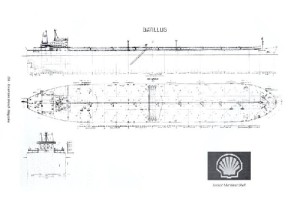 On April 6th, 1971 the contract for building the Batillus Supertankers was signed.

The result of the Yom Kippur War in 1973 was the significant drop in the supply of oil, called the ''oil shock''. The shipping industry started seriously to doubt about the ULCC project – there was a chance of not using the full capacity of the biggest ships ever built.

That did not stop Shell. The calculation were that they had already put a lot of finances in building the Batillus Class Tankers and cancellation of this investment would be away bigger financial stress for the company and its employees.

The project started in January 1975 with cutting the first sheet metal. Shell hoped for better times in the future. 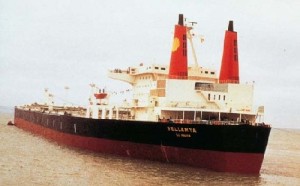 The capacity of the engine was 64,800 Hp total power, made by 2 propellers. Each propeller was powered by 2 Stal Laval steam turbines. The fuel was enough for 42 days due to her daily heavy oil consumption of approximately 330 tonnes. The maximum speed of Bellamya was 16.7 knots.

The total volume of Bellamya was 677,300 m3 divided into 40 tanks. Like her sister ship Batillus, the 4th biggest ship in the world, had her tanks specially designed to lower significantly the risk of pollution in cases of eventual grounding or collision. They were separated to lateral and central tanks with special dimensions.

All the Batillus Class Super tankers were build outstripping the time international standards. Their wing tanks maximum unit volume was less than 17,000 m3, at the most vulnerable parts the reduction was to 9,000 m3.

The Story of the Second Batillus Class Supertanker

Bellamya was put in service a few months after her sister Batillus and after the new oil terminal Antifer, a specially built port near Le Harve. 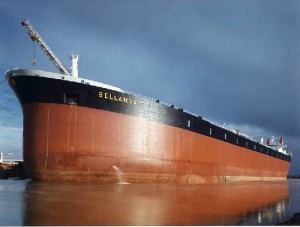 This terminal appeared to be one the minor capable of accommodating the biggest tankers in the world.

Bellamya early demise came mainly due to two reasons. The world oil market was in crisis and the situation did not get better. The second thing that took her out of service was the thing that made her so marvelous – her sizes. As one of the biggest ships in the world, Bellamya was not able to traverse the Panama Canal and Suez Canal. She also had issues with the docks she anchored at.