Currently, the biggest ship in the world in service is Maersk Mc-Kinney Moller. She is the first of the Maersk Triple-E class ships. This new Maersk line will contain 20 vessels, planned to be delivered over the next couple of years.

The largest ship in the world in service has been designed to set leading standards in the container industry.

The Triple-E class will impress not only with sizes, they will be energy efficient and enviromentally improved. It is expected the CO2 emission on the Asia-Europe route to be lowered by 50%.

The Triple E class was announced by Maersk in February 2011. The initial order for ten container ships with lower fuel consumption was estimated at US$1.9 billion. Four months after that, in June, Maersk ordered Daewoo Shipbuilding in South Korea ten more vessel at the same price.

The payment was set as "tail-heavy" 40% during the building and 60% on delivery of the vessel. The warranty was negotiated to be 2 years (the current standard was an year).

The Daewoo Shipbuilding in South Korea was chosen to Maersk's Odense Steel Shipyard in Denmark due to the lower offered price. 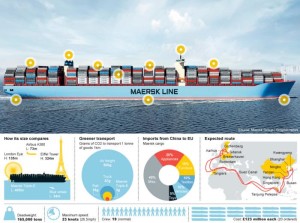 The work started with the first ship Maersk Mc-Kinney Moller, the biggest ship in the world in service.

On June 18th 2012 at the DSME shipyard in South Korea there was a steel cutting ceremony and 5 months later, on November 27th , the hull of the Triple-E class container ship was laid down.

Forty-thousands worker were engaged in DSME shipyard during the building of the world biggest ship currently in service. 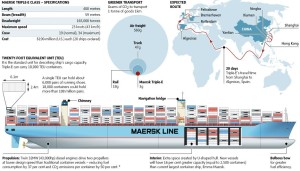 Maersk Mc-Kinney Moller is sheer in sizes - 400 m long, 73 m high and 59 meters wide. The capacity is 18,000 TEU (twenty-foot container) – each 8 ft. high and wide and length 20 ft. The propulsion system is '''twin-skeg''' or two-engine, two-propeller. The diameter of each propeller is 9.8 m and each propeller has four blades. The world biggest ship is driven by an ultra-long-stroke engine with power 30,000 kW. Compared to a traditional engine this type of engine operates with less revolutions.

Compared to a traditional container ship the Maersk Mc-Kinney Moller hull is like a U-shape, which makes it more spacious. It also gives higher stack possibility in front of the bridge with no visibility loss. 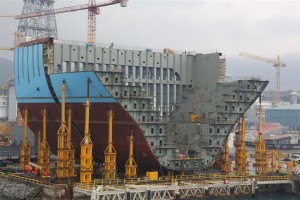 The lifeboats onboard Maersk Mc-Kinney Mollerare are modern but small and can't be called impressive, unlike her size. There is a suite for the captain that consists of three rooms – a cabin, an office and a day room.

The top speed of the world biggest ship is 23 knots and the optimum is 20 knots.

Maersk Mc-Kinney Moller travels 184 km using 1 kWh of energy per ton of cargo – result combination of the energy-efficient engine, the U-shape hull and a special system of recovering the waste. The exhaust gas is used to supply extra power which helps propelling the biggest ship in the world. That is why the carbon dioxide emissions of Maersk Mc-Kinney Moller are nearly  50 per cent lower compared to the average one. Only 14 ports are capable of accommodating the biggest ship in the world and they are located only in Northern Europe (6 ports) and in Asia (8 ports). Maersk Mc-Kinney Moller can't traverse the expanded Panama Canal but she is able to sail the Suez Canal.

''As you sail the waters of the world, may your journeys be smooth and your tasks successful. May you bring happiness to your crew, may you be a safe haven for all who board you and may you bring pride and prosperity to all. I wish you Godspeed'' 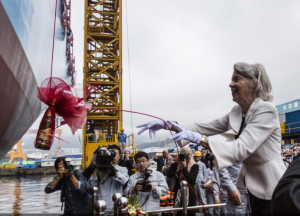 The biggest ship in the world was launched on February 24th 2013.

Maersk Mc-Kinney Moller was specifically constructed to be efficient and very competitive while operate on one of the busiest routes in the world between Asia and North Europe.

The name of the first Triple-E vessel came from a son of the A.P. Moller-Maersk group’s founder. In April 2012 he passed away. He was 98-year-old.

The Maersk Mc-Kinney Moller maiden voyage started on July 16th from Busan with captain Jes Meinertz. He was changed by Captain Niels Vestergaard Pedersen for the complete round-trip from Aarhus, Denmark.

Two more vessel from the Triple-E class has already been launched and currently are in service - Majestic Maersk and Mary Maersk. 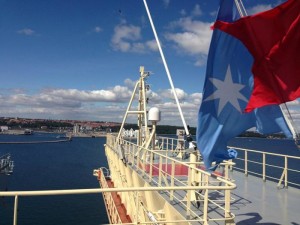 Marie Maersk is currently at a stage ''sea trials'' and six more of the largest ships ever are under construction - Madison Maersk, Magleby Maersk, Maribo Maersk, Marstal Maersk, Matz Maersk and Mayview Maersk.

All the 20 ship from the Triple-E class should be launched till 2015, they will replace the old and less efficient ship in the important route Asia - North Europe carrying cargo.

They are coming to show the world that the largest ships ever, like Maersk Mc-Kinney Moller, might be efficient and environmental friendly.